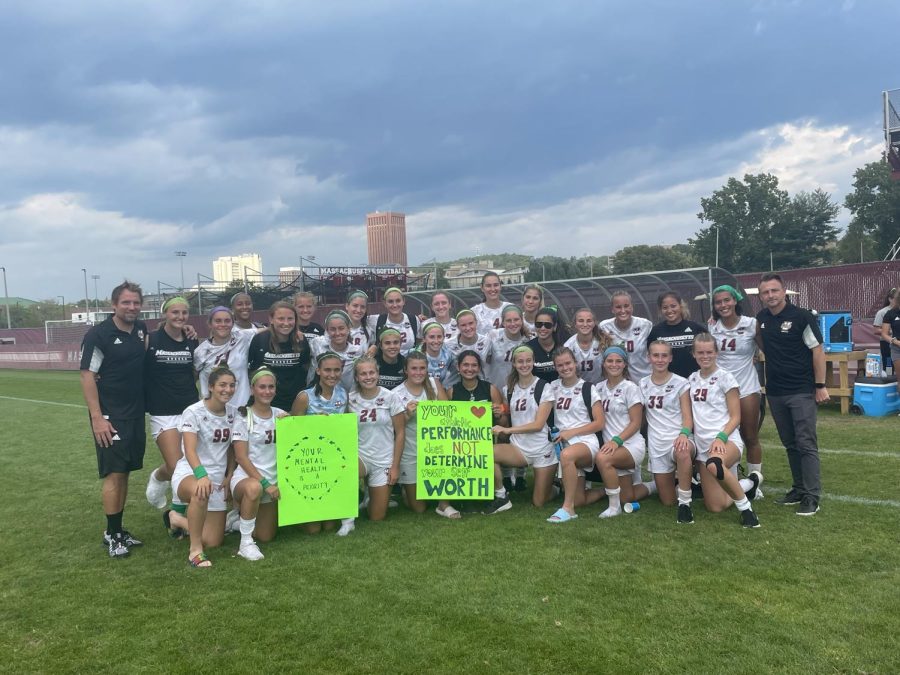 Banners and banners decorated the fence surrounding Rudd Field at the Massachusetts women’s soccer team’s game against Davidson, as UMass teamed up with Hidden Opponent, a nonprofit organization focused on advocating for the mental health of student-athletes.

Hidden Opponent was founded in 2019 by Victoria GarrickD., a former Division I women’s volleyball player at the University of Southern California. Having struggled herself through anxiety and depression, Garrick aimed to create a safe space for all student-athletes.

With green bows in their hair and green ribbons on their arms, the ladies lined up in midfield, joined by officials and wild cats for a moment of silence before the match in honor of all those who were lost to mental health issues. . Next, Bella Mendoza was in the network, which was fitting because the young guard is the campus ambassador for the hidden opponent.

“It’s just an organization that strives to break the stigma on student-athlete mental health, and spread awareness of it, that it’s a real thing,” Mendoza said. “I think it’s important that we have a game to address the problem.”

Mendoza went through her own psychological struggles last year, battling through what she explained as “one of the lowest points of my life.”

“My best friend, you saved my life. I think that kind of sparked something inside me to want to make a change and take the next step to be involved in any way I can,” Mendoza said.

Best friend in question: Lauren Bonavita. She, along with the rest of the Minutewomen, helped make posters lining the fence for Sunday’s game.

Here at Rod Stadium for today’s game between UMass Women’s Soccer and Davidson.

Check out some of the posters the team made that were posted all over the field pic.twitter.com/vlE1qlzyvg

“It meant a lot to me,” Mendoza said. “It’s gratifying to know that everyone cares so much and everyone takes it very seriously, and there are so many people, not only on our team, but in the sports department that care so much about this and they think it’s something to talk about.”

As an ambassador on campus, Mendoza joins Abby Packard, a softball player, and Andrew Chapon, a former track and field athlete. This was Hidden Opponent’s first event this year at UMass, but they’re hoping to get more in football, hockey and basketball.

“We went through mental health training,” Packard said. “We only build on our campuses, but it’s in all 50 states at this point and it’s in many universities.”

With more than 800 ambassadors on campus this year in the US across college and high school, Hidden Opponent continues to grow.

“Realistically, it’s not just student athletes, everyone’s mental health is important,” Chabon said. “But we understand that athletes are often found to be this kind of higher form, with different standards being unable to have the same level of vulnerability as ‘normal’ people.”

The main message that the occult opponent is trying to convey is that everyone, especially student-athletes, is not alone.

“We talk about it a lot and are encouraged to have those conversations,” said Technical Director Jason Dweck. “It’s a huge problem and it’s very scary because we see a lot of situations where people don’t feel that living is the best option for them. So, we’re just trying to help raise awareness and keep this conversation going in the direction that more student-athletes have confidence. And the comfort to talk about how they feel.”