Rutgers Marine Field Station rises on weathered plumes overlooking a fragile wetland, surrounded by a sea of ​​tall salty weeds that are scattered here and there in hypnotic patterns by the wind. White herring gulls dot the brown swamp as they stand over dark brackish tide pools, looking for a fiddler crab.

Ten years ago, this was Superstorm Sandy’s Ground Zero, which flew over the entrance when he was Made landfall in New Jersey.

Today, the estuary is healed around the remote research facility at Little Egg Harbor. However, the swamp environment itself has changed, in response to the rising global temperatures attributed to it Climate change Many believe it will likely spawn more deadly storms than Sandy and now Hurricane Ian, which only recently devastated Florida.

In a place between land and sea, researchers are studying these changes. They collect larvae that float with the tide. They track visitors arriving by air or sea, observing the cycle of daily life amid the tidal pools left behind when the water recedes, and in the Spartina reeds at the water’s edge. The field station serves as a window into not only the impact of climate change, but also how the next big storm that will hit New Jersey will behave. 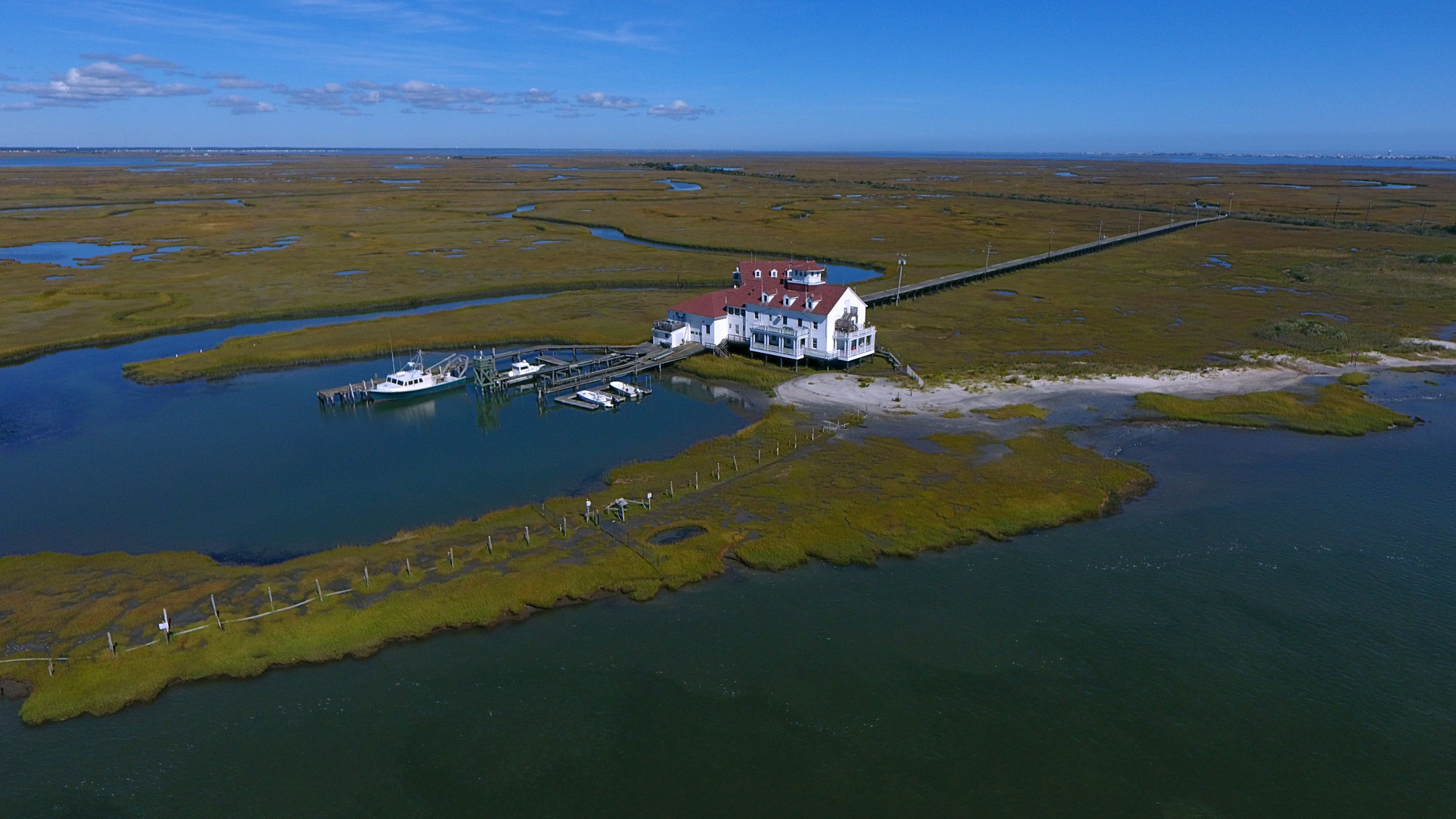 Getting here feels like a trip to the end of the world.

The road to the station begins at Tuckerton and involves a seven-mile drive through uninhabited islands and mudflats, over single-track bridges where fishermen cast their lines, past secluded anchorages and finally to a cul-de-sac at the Mullica Hill Estuary where white buildings topped with red roofs appear. Finally in the distance. The road is not always impassable. High tide sometimes floods the pavement several times a month, even on sunny days.

A walk from the road across a high wooden bridge over the swamp finally takes you to Roland Hagan, who came here as an apprentice in 1989 and now works as operations manager for the Rutgers Laboratory who has been studying downstream for the past 50 years.

“I make sure the place doesn’t collapse,” he laughed before setting off for a tour of the station, from the “clean labs” that are always dirty because no cleaning chemicals are allowed in the room for fear of contaminating the samples, to the observation dome high above the station that offers a panoramic view on wetlands. 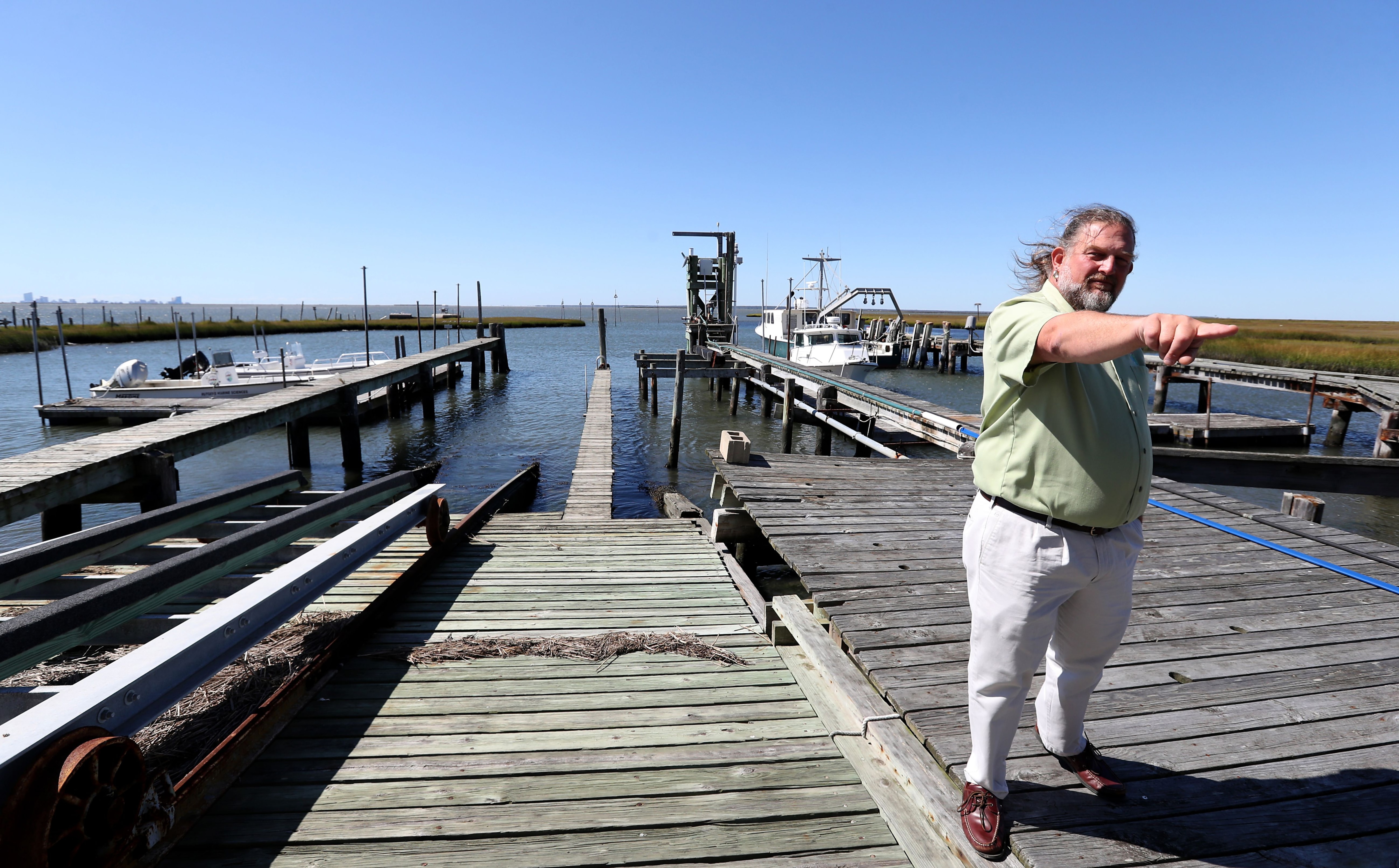 Above the water, Hagan noted, the lab was “like a boat on stilts.” Wastewater is collected in storage tanks and pumped out every week so as not to disturb the environment they study every day. Inside are samples of fish and crab larvae collected by researchers and students. Sensors in the water track the passage of marine life. One ongoing study includes documenting the prevalence of microplastics in fish.

Outside he beckoned to a pelican, once a rare guest of the warm waters, slithering away from shore, diving in and out with his lunch. “They don’t like cold air very much,” Hagan noted.

With changes in climate, there has been a major shift in the types of fish seen around the station, including more species from southern Cape Hatteras, and fewer northern Cape Cod, according to Oscar Schofield, chairman of the board of directors. Rutgers Department of Marine and Coastal Sciences.

“Different fish are moving downstream because the ocean is getting warmer,” he said.

And higher water temperatures are not the only downstream changes. Schofield noted that sea-level rise here is happening faster than anywhere else in the world, in part because the coast of South Jersey continues to sink; The geology legacy of the last ice age.

can spell it More flood problems in Atlantic City, which can be seen from afar, sometimes casting an infernal red glow in the night sky when the clouds are low. Some studies suggest that half of the gaming resort could become uninhabitable by 2060.

As part of its research, the station deploys a fleet of underwater drones as well — sometimes to track marine life, and sometimes to collect data on hurricanes.

The night before Sandy reached shore, one of these drones designated RU-23 was already sending data about the storm. Released into the ocean four days ago by a Rutgers team led by researcher Travis Miles, now an assistant professor at the university, its job was to gather information about currents and water temperatures, even as the seas roared.

The yellow torpedo-like robotic craft, known as the Slocum Glider (named after Joshua Slocum, the first man to circumnavigate the world solo), Unique search tool. It has no propeller, using its ability to rise and dive into the depths of the ocean to navigate by “flying” through the water in a series of dives. Using minimal power, it can run for weeks, sink and glide, then rise toward the surface, over and over again.

As the storm surged toward the New Jersey coast, Schofield was able to keep tabs on the data being uploaded by RU-23, seeing what was happening in central Sandy in real time from more than 100 miles away. 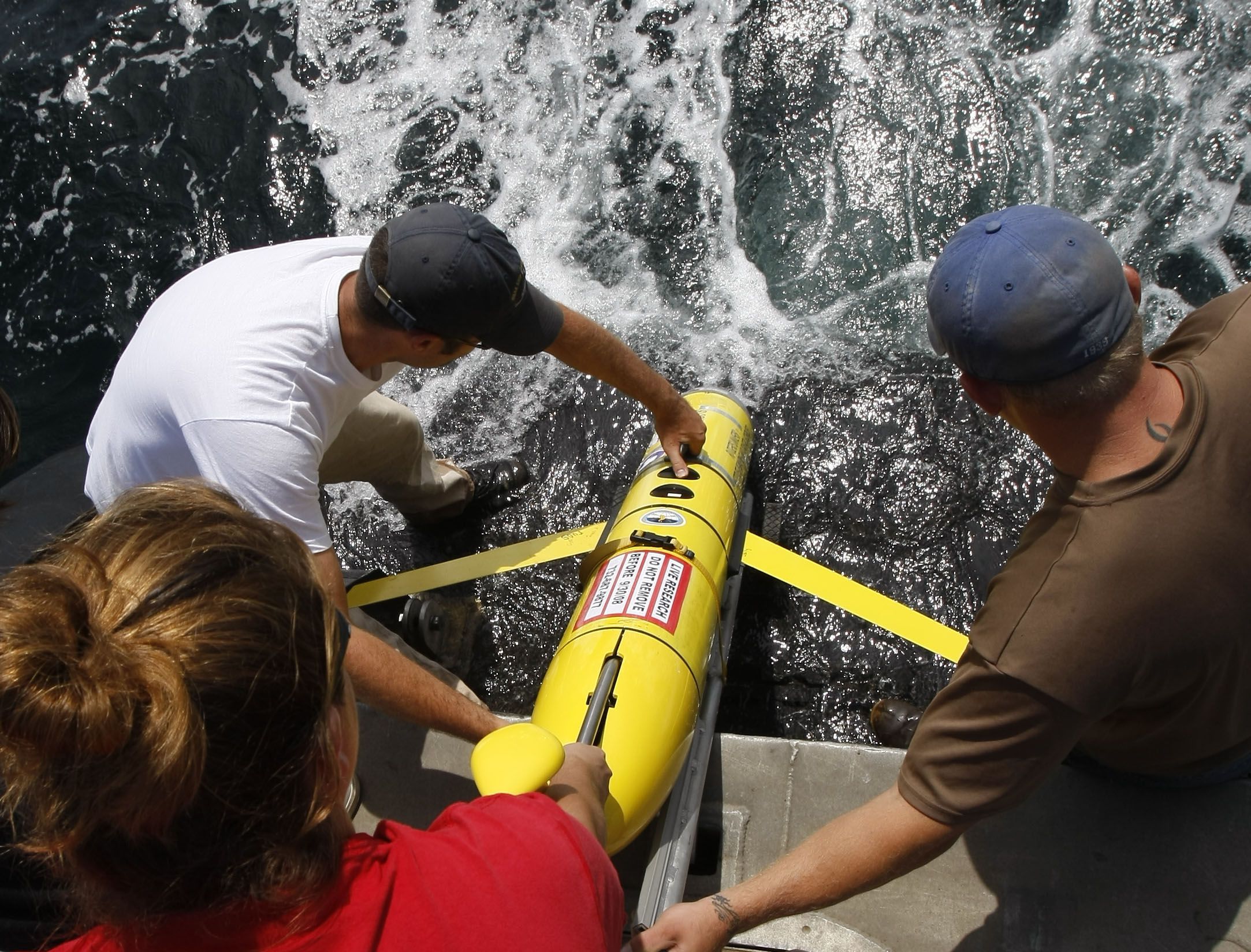 “We would lock our doors in the evening and get out of our Dodge and check on our in-laws. But we were getting the data because the robot was at the heart of the storm at sea,” he said, thinking back to the storm that happened 10 years ago.

A similar deployment of a drone during Hurricane Irene a year ago, he said, provided researchers with their first “Eureka” moment. Hurricanes get their energy from the ocean, and act as a “fuel canister” for the storm. The higher the water temperature, the more fuel is needed for the hurricane. Weather satellites can detect surface water temperatures, allowing forecasters to predict potential hurricane intensity.

But the ocean is basically no different from a multi-layered cocktail, defined not by stacked wines, as in a pousse café, but by different water temperatures at different depths, not visible by satellite. A Rutgers drone that was silently gliding through those layers noticed a dramatic change in ocean temperature. During Irene, she found that the different layers of water began to mix as the hurricane approached, causing the surface temperature to drop rapidly – cutting off the hurricane’s fuel supply and causing significant changes in its intensity.

The deployment of RU-23 through Sandy once again recorded a similar temperature change.

Sitting at home, Scofield watched from his computer as the data came in, as if it were traveling from another planet. “Look at the ocean!” He remembered the statement to a colleague while they monitored the data. “I just did that.”

He said this research has given forecasters greater insight into the science of hurricane forecasting and their ability to predict intensity.

This is exciting for him.

“We’re about to get a new way of responding to those storms early on,” Schofield said. “We have the atmosphere. But we didn’t get the ocean right. It resurfaced with new approaches, so we can determine not only where the storm is, but its intensity. It affects whether we stay in place or order evacuation. If you don’t get the strength in shape. Right, you won’t be able to increase the number of soldiers properly.”

Meanwhile, Sandy’s approach turned out not to be such a quiet evening for Hagan, as the eye of the storm was expected to pass straight through the field station.

Normally the lab was working around the clock, and had ordered the lab to be evacuated as the winds from the storm started to build up, and it seemed like a freight train was coming. With the facility closed, Hagan climbed into his Ford F-250, drove toward Tuckerton and to safety. It will be days before he can return.

When he returned, the deck of the wooden bridge leading to the station had been separated from the reporters. Boat docks have been smashed. The mainland’s power was cut off and then completely lost after the backup generator was flooded.

In the old generator shed, now used for storage, a little of today’s swamp grass is still tucked into one of the vents with a high-water orange mark. But this isn’t the only keepsake Hagan keeps from the storm.

In his office, an old empty bottle of Sandy McDonald’s Scotch whiskey is on a shelf. There is no label, but the name of the famous distillery is prominently raised on the brown glass. He displays it, tracing the name “Sandy” on the bottle dating back to the 1940s. Just where it came from, he didn’t know. The bottle was somehow deposited due to the surge and torrential flooding through the swamp and beyond, and the bottle was carried to the doorstep of the Rutgers Research Station

“I found her when I got back,” Hagan said.

Keeps a bottle of whiskey as a keepsake; A calling card from a visitor that few have forgotten. 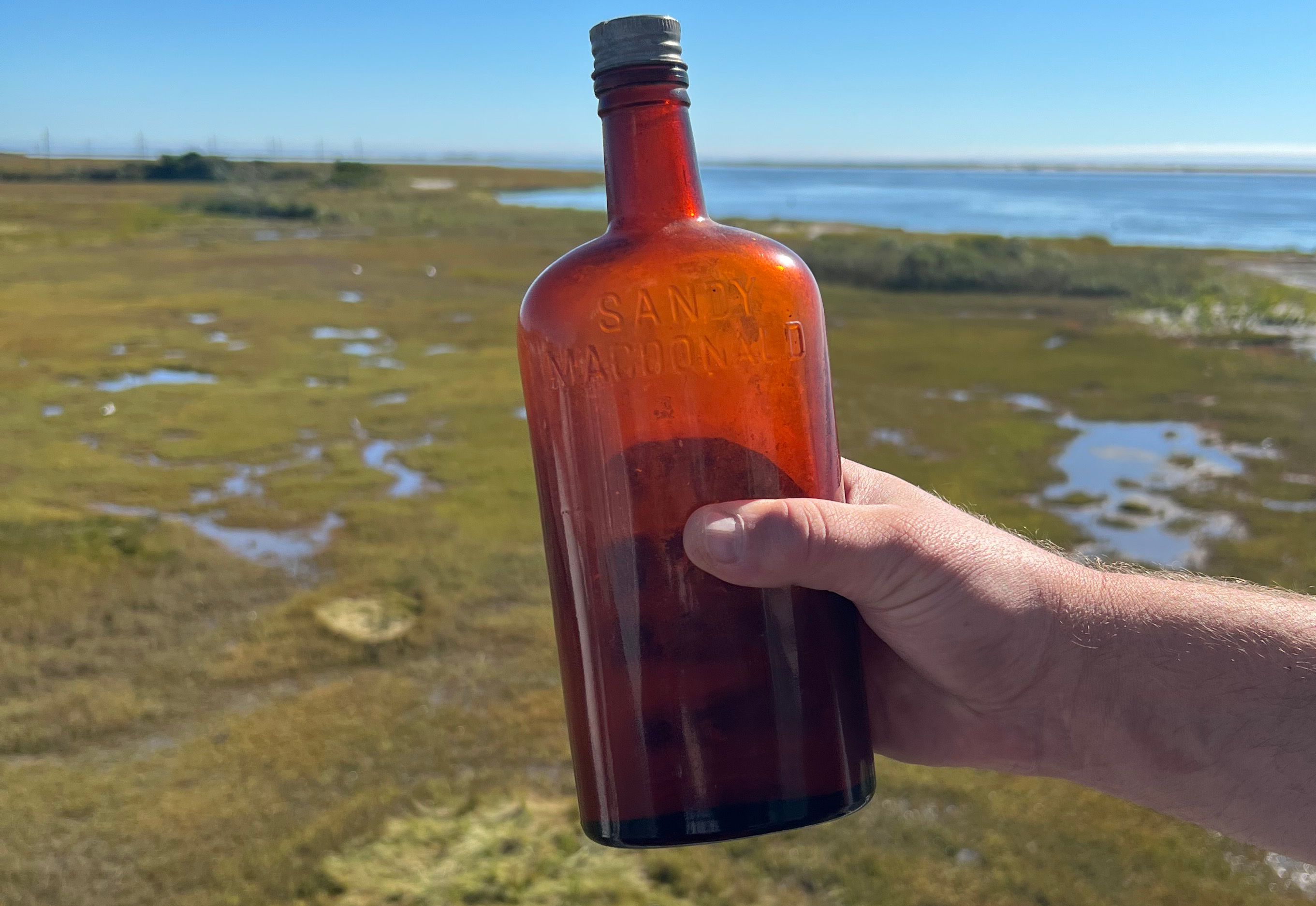 Our press needs your support. Please sign up today for NJ.com.