2022 was a difficult year for European agriculture.

We can start with the conflict between Russia and Ukraine and how that has changed market conditions and supply chains for some important things, like fertilizers. After that, we can continue with the fact that these difficulties were followed by drought conditions. Figure 1 summarizes some of what has become visible across the European agricultural crop market.1 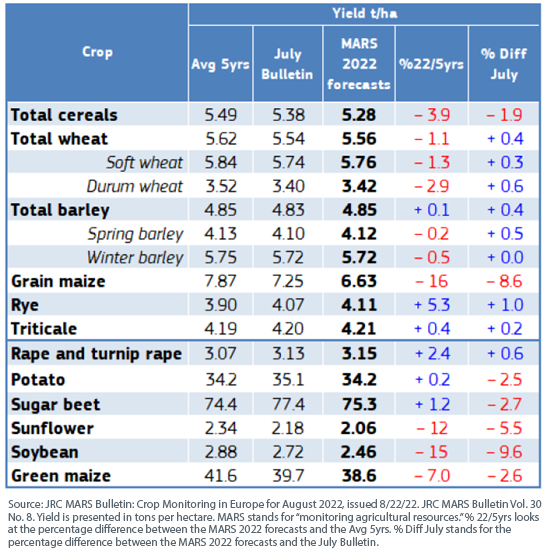 There are European politicians expressing their support for the use of genetic modification techniques in agriculture. Italian lawmakers are one example, the catalyst being that recent heat waves and droughts are leading to demand for more resilient crops. If genetic modification is one of the pathways to be provided for this kind of mitigation, it could receive all due consideration. Italy’s longest river hit its lowest levels in the last 70 years during the summer of 2022.2

A single genetically modified crop is grown in Europe

A particular strain of insect-resistant maize is the only genetically modified crop that has been grown within the European Union, based on current highly restrictive rules. This is in stark contrast to the approach taken in the United States, where about 90% of soybean and corn fields have been genetically modified. 3 Figure 2 shows the development of a few different crops in the United States.4

Figure 2: Adoption of genetically engineered crops in the United States, 1996-2020 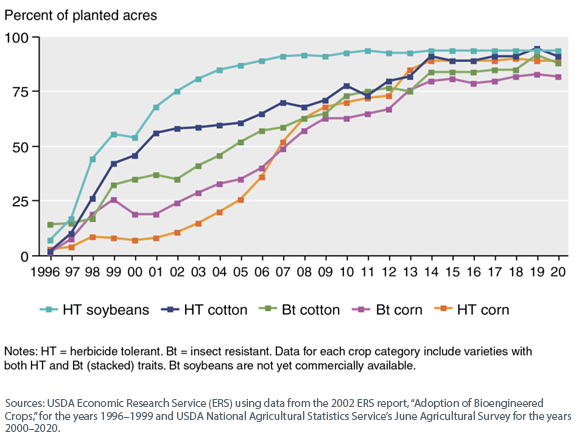 More importantly, there is a difference between genetic modification and gene editing.5

It was thought that gene editing might bypass Europe’s GMO regulations, but those hopes were dashed in 2018 when the European Court of Justice ruled that GMO crops should be subject to the same regulations as GMOs.6

What are the most desirable results?

If avoiding gene editing and GMOs is determined to be the desired outcome, that’s one thing. Perhaps current policies in Europe will achieve this goal. However, we have many different goals globally. Reducing greenhouse gas emissions is certainly another widely discussed goal in Europe and across the planet.

What if the widespread adoption of genetically modified crops in Europe could reduce the equivalent of 7.5% of the region’s total greenhouse gas emissions? This equals roughly 33 million tons of carbon dioxide equivalent per year.7

The desired outcome would probably be higher yields, as this could lead to increased food security for a given area, and could also lead to an increase in supply relative to baseline during a period of high inflation. Agricultural commodities tend to see their prices move based on supply and demand expectations. Research so far indicates that genetically modified crops can increase yields compared to unmodified baselines.8

Conclusion: It is important to keep all doors open as much as possible

Objective equity strategies, at their core, are about finding companies that seek to provide solutions to big problems and big questions. If the world is to support nearly 10 billion people by 2050 – as close to net carbon neutrality as possible – it is likely that we will need to explore many solutions. How we decide to grow food is the crux of it.

BioRevolution Strategy for WisdomTree He seeks to invest in a range of different companies focused on human health, agriculture, food, materials, chemicals and even energy – if a company can understand the information embedded in its DNA, then it can open up more and more possibilities.

Originally published By WisdomTree on September 29, 2022.

Important risks related to this substance

There are risks associated with investing, including the possibility of losing capital. The fund invests in BioRevolution companies, companies that have been transformed dramatically through advances in genetics and biotechnology. BioRevolution companies face stiff competition and possibly rapid product obsolescence. These companies may be adversely affected by the loss or impairment of intellectual property rights and other proprietary information, or changes in government regulations or policies. In addition, BioRevolution companies may be exposed to risks associated with genetic analysis. The fund invests in the securities included in its index or represented by it regardless of investment merit, and the fund does not try to outperform its index or take defensive positions in declining markets. Index configuration is controlled by the index committee, and the index may not work as intended. Please read the fund’s prospectus for specific details regarding the fund’s risk profile.